Floraleda Sacchi, one of the best known and most original harpists on the international stage, recently gave a recital in the old church of the Santa Cruz la Real Convent in Segovia, which today serves as the Aula Magna of IE University. The concert was organized by IE University Arts Society in collaboration with pianist and orchestra conductor Manuel Tevar, one of Spain’s most accomplished musicians, who has achieved a greater presence on the international arena than any of his Spanish peers. Sacchi played many of the pieces that have earned her international acclaim, including some from her latest album, #DARKLIGHT. They included soundtracks and contemporary music composed for and played on the electronic harp. Floraleda Sacchi is an exceptionally talented artist who has brought out over 20 albums, recorded and sold by major music companies. She has won sixteen prizes in international competitions and has performed in some of the greatest concert halls in the world, like Carnegie Hall and the United Nations Concert Hall in New York, Berlin’s Konzerthaus, and Kyoto’s Prefectural Hall.

A snowstorm in the city center can bring the most wonderful gifts for a photographer, and you have to seize the opportunity when it presents itself. Today the snow has brought with it this image of two women dressed in traditional Segovian costumes looking not just highly unusual, but also kind of eerie and enigmatic. It strikes me as a scene from past times. Days marked by cold and inclement weather always serve up some kind of surprise.

The deafening silence that accompanies a snowfall never ceases to surprise me. I feel privileged when I take an early morning walk through the deserted gardens scattered around my city, just after the last few snowflakes have fallen. I can’t help but wonder why the city takes so long to wake up on days like this. Passers-by walk the streets in silence, and the practically inaudible crunch of my feet on the soft, white snow jars the almost mystical aura of peace. At that moment I’m reminded of Saint John of the Cross, who prayed and rested here, and I totally understand his need for silence. Snow absorbs noise and invites a sense of calm, reflection, and inner peace. Today he would have been happy, just as I am now.

Whenever it snows I try to go up to San Cebrián’s Gate, which forms part of Segovia’s city walls, to take photos of the landscape below. The gateway served to connect the city with the district of San Lorenzo and the old Dominican Convent which now houses the IE University campus. It’s impossible to survey Segovia from the highest point of any of the towers that make up its city walls and remain impassive.

Architects Karen McEvoy (Ireland), Frank Barkow (Germany) and Stefano Boeri (Italy) were selected by IE University to take part in the latest edition of the Architectonic Integration Workshops organized by IE School of Architecture & Design. All three enjoy world renown for their commitment to architecture and their search for excellence in the field. Thus second and fourth-year students are able to work alongside them on campus and gain insights from three contemporary architects who set trends at an international level. 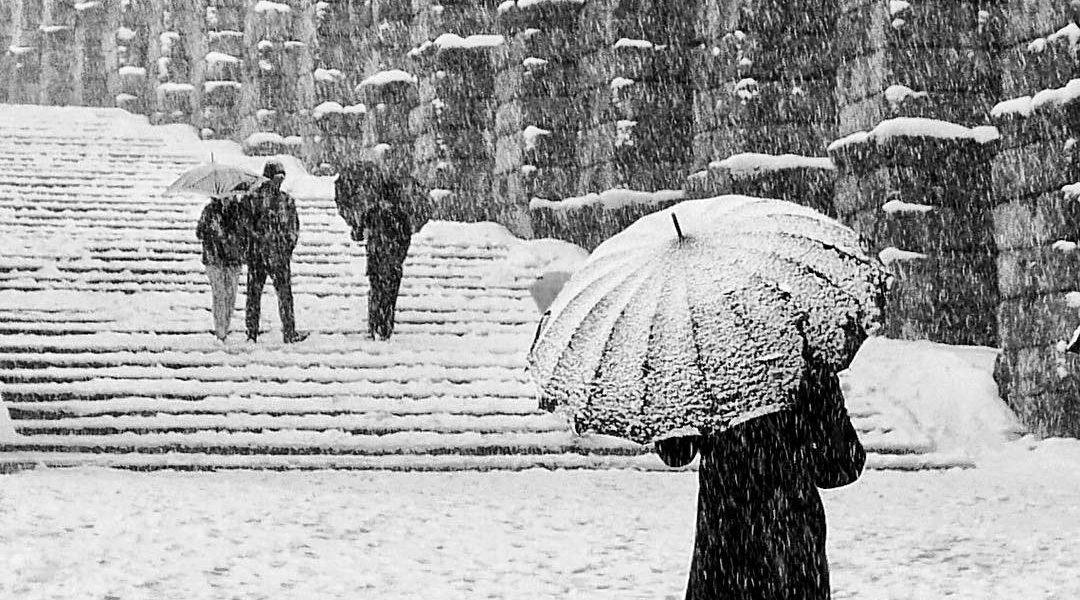 The forecast said that a big snowstorm was on its way to the central regions of the peninsula. Nobody could have imagined that it was going to be the heaviest snowfall in Segovia for the last 20 years, bringing the city’s streets to a standstill. But every cloud has a silver lining. Nature brought us the gift of indelible picture postcards. As the Spanish saying goes, “Around twelfth night, expect more snow and ice.”

Autumn is slowly leaving us. Now, in November, sunlight fades too early. It’s a ritual that is repeated every evening – darkness falls slowly and silently, and just before it envelops the Santa Cruz la Real campus, a new, artificial light appears which is warm and beautiful. The hallways and walls of the old building change color. The students in the library look strangely detached from this calm transition. And the days get shorter and shorter, heralding the arrival of a new winter.

Segovia is an ideal city to discover on foot. The path that goes along the Eresma valley is wonderfully pleasant at any time of year and can surprise walkers with sights like this one. Segovia has a serene beauty, which should be taken in one piece at a time, calmly, without rushing or following any particular path. As the poet Antonio Machado once said: “Wayfarer, the only way is where your footsteps lead you and no other. Wayfarer, there is no set way. You make your own path by walking.”

“Light does not fall upon Segovia, but rather it is the city that rises toward it.” So said the Andalusia-born poet María Zambrano (Vélez-Málaga, 1904-Madrid, 1991), a writer and essayist who spent her childhood and youth in Segovia where she met Unamuno and Machado, and drank in the mysticism of San Juan de la Cruz. It was in Segovia that Zambrano, a privileged disciple of Ortega, wrote her first articles and developed her capacity for universal thought. She was also in Segovia when Spain declared its second republic, of which she was a fervent supporter. When war broke out, she left Segovia and went into exile, first in Paris, then in Mexico, La Habana, Puerto Rico, Rome… Twenty five years after she left Spain, Zambrano wrote an essay entitled “A place for words: Segovia”, in which she waxed philosophical about places around the city. She also talked about the special quality of the light in Segovia, something that had a marked impact on her. It’s the kind of light that puts everything in its natural place, she tells us. She’s right, the city rises each day toward the light, just like in this photo of its old quarter. This light will always remain, eternal, just like the literary legacy that María Zambrano left us.

One of the strangest fashions I’ve ever known is that which consists of carrying around a stick for taking selfies. A large number of the tourists walk around the center of Segovia with one. Whenever I see them climbing up the steep steps of the Postigo area to see the aqueduct in all its glory, I’m reminded of poor Sisyphus, condemned by the gods to keep rolling a boulder up a mountain, only to have it roll back down every time he reaches the top. Now, I’m not saying that tourists have to push enormous rocks up there, but they do have to carry their long sticks for their smartphones. The unhurried pace of Segovia, the atmosphere of its steep streets, the magic of its hidden corners and squares, are all hard enough to capture with a smartphone or camera. If I had to carry a selfie-stick around it would be very difficult indeed to capture the soul of my city. That’s why, if you visit Segovia, leave the stick at home, and don’t be a slave to selfies. Sharpen your senses. Try to retain in your memory the images of this beautiful little city, which is particularly beautiful in autumn, when temperatures are still benign. Challenge yourself to capture the essence of such an old and eternal place, where time seems to pass slowly, as if the rest of the world were travelling at a different speed. You don’t need a selfie stick to do that.